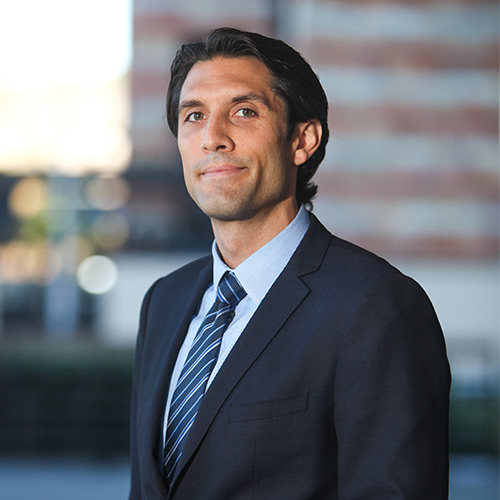 Kyle J. Siems received his Bachelor of Arts in History from Loyola University of New Orleans, where he graduated Cum Laude and was chosen to study at the John Felice Rome Center of Liberal Arts during his junior year. Kyle received his Juris Doctor degree from the University of the Pacific, McGeorge School of Law. During law school, and received a fellowship grant to work with the Legal Aid Society of Hawaii between his second and third year.  He also worked as a committee consultant at the State Capitol in Sacramento, where he assisted in the drafting of numerous pieces of legislation.

After graduating law school, Kyle worked as a staff attorney with the Legal Aid Society of Hawaii.  As Legal Aid, Mr. Siems primarily handled family law cases including divorce, child custody, and adoption, as well as represented children in the foster care system. He was recognized for his extraordinary leadership and contributions in promoting and providing legal services to the poor.

Upon leaving Hawaii, Kyle moved to San Diego to work at a large Family Law firm.  He then joined Wilkinson and Finkbeiner in 2014.  Kyle has handled hundreds of dissolution and custody cases from inception to resolution with tremendous results. His calm demeanor and ability to shift gears as the case demands has drawn accolades from clients and peers.

Kyle Siems recently completed a successful negotiation allowing his client to retain the entirety of their retirement savings as reimbursement for the payments made towards the other party’s education expenses.  During the marriage, the client’s spouse left their successful career to return to school, while the client paid the tuition.  After completing their education, the spouse’s new career paid only a fraction of their prior earnings.  To address the situation, Kyle enlisted the assistance of a vocational expert to assess the spouse’s earning capability.  This strategy proved successful in allowing Mr. Siems’ client to retain the entirety of their retirement savings to compensate for the amounts paid toward said education.

In a complex post-judgment case, Kyle recently obtained a six-figure settlement for his client after discovering that the opposing party had failed to disclose significant assets from their divorce several years prior.  Although he did not represent the client in her divorce, after reviewing her dissolution judgment documents, he deduced that significant sums were omitted.  Utilizing the court’s reservation of jurisdiction over omitted assets, he was able to obtain a remarkably favorable settlement with the assistance of his team of expert accountants, etc.

In a recent collections matter, Kyle was able to obtain an injunction on our client’s ex-spouse’s accounts by filing an ex parte, emergency motion with the court.  The ex-spouse owed a substantial amount of support arrears to our client.  The complicated matter ended with a negotiated settlement and a significant payout to our client.

In a complex child custody case, Kyle successfully prevented one parent from moving the parties’ children across the country upon dissolution.  The client was enlisted Navy personnel stationed in San Diego, and after the parties’ separation, one parent requested the right to take the children to the East Coast to be closer to family.  After a series of hearings, Kyle obtained an order allowing the children to remain in San Diego with our client.

In a highly contested custody matter between enlisted military members, Kyle obtained a 50/50 custody order for his client.  The parties were embroiled in a very combative relationship, and one parent wrongfully filed for a restraining order against the other parent to gain an advantage in the custody battle.  After several hearings on the matter, the court determined that our client was not a threat and ordered custody to be shared by the parties.  After defending several motions and getting sanctions levied against the other party, Kyle was able to obtain a joint custody order on the client’s behalf.

Recently, Kyle obtained a move-away order allowing one parent to move the parties’ teenage son from San Diego to their residence in Las Vegas.   The teenage son had been struggling in school in San Diego and began showing signs of heading down a dangerous path.  Kyle filed a motion to modify custody to allow the son to move to Las Vegas to live with our client.  After a contested hearing on the matter, the court allowed the child to move to Las Vegas.

In another recent case, Kyle helped a parent gain primary custody of their son after the other parent’s actions proved they were unfit to care for the parties’ young child.  Kyle’s client had alleged instances of abuse by the other parent.  After putting they other party on the witness stand to testify, Kyle obtained testimony from  the other party admitting to their actions and inability to properly care for the child.  In large part due to Kyle’s strategies and experience, the court ruled in favor of the client and granted them primary custody.

*It is important to note that any case success examples are not indicative of future results.  Additionally, our firm and Kyle represent generally equal numbers of husbands, fathers, mothers and wives.